The BoM ENSO outlook has been dropped back to ‘El Niño Watch’. This is due to the current weak El Niño like conditions being expected to weaken over coming months. The Indian Ocean Dipole however, is forecast to become positive from early winter. It, and the prediction of higher than normal atmospheric pressure is influencing the outlook to be likely drier and warmer into winter for Southern Australia.

After a dry start to Autumn, a few areas have had good falls in May, mostly due to two tropical cyclones and some well-timed cold fronts further south. Areas of Queensland, Northern Territory, New South Wales and Victoria have received ‘Average’ to ‘Above Average’ rainfall for the month (Fig. 1). Large areas of Western Australia, however, have been exceptionally dry, experiencing ‘Very Much Below Average’ or decile 1 rainfall (Fig. 1).  The east coast of Queensland and New South Wales have also experience ‘Below Average’ rainfall for the month of May (Fig. 1). These rainfall events have helped improve the overall three-month decile for key agricultural production regions in Australia (Fig. 2). 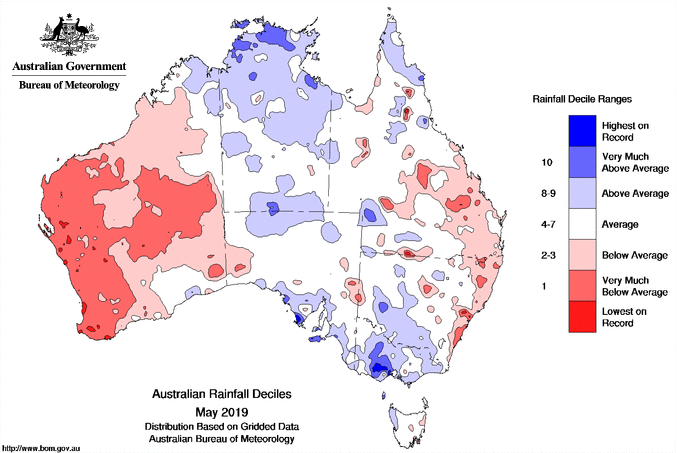 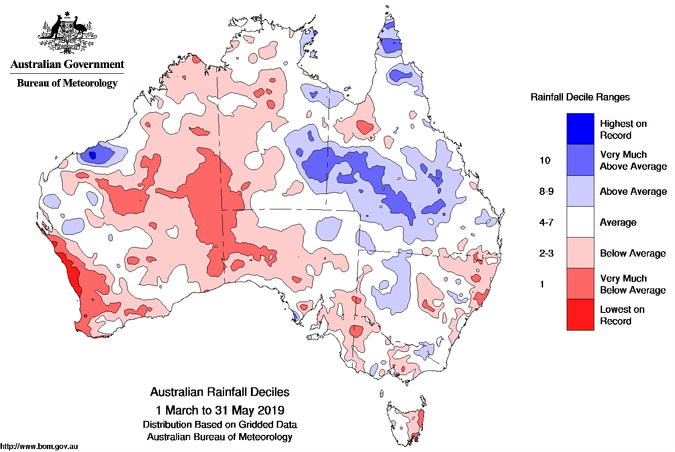 The BoM’s ACCESS model predicts there are lower chances of achieving average winter rainfall over much of eastern Australia, south eastern South Australia, and Western Australia’s southern coast (Fig. 3). Note that the outlook accuracy is moderate to high for most of the country at this time of year except for southeast Australia and far northern Queensland.

Australia wide it has been the warmest start to the year on record with the month of May continuing this trend with maximum temperatures ‘Average’ to ‘Above Average’ across most of Australia. North west of Western Australia was particularly warm with unusually hot days for this time of year resulting in maximum temperatures being the ‘Highest on Record’ (Fig. 4). 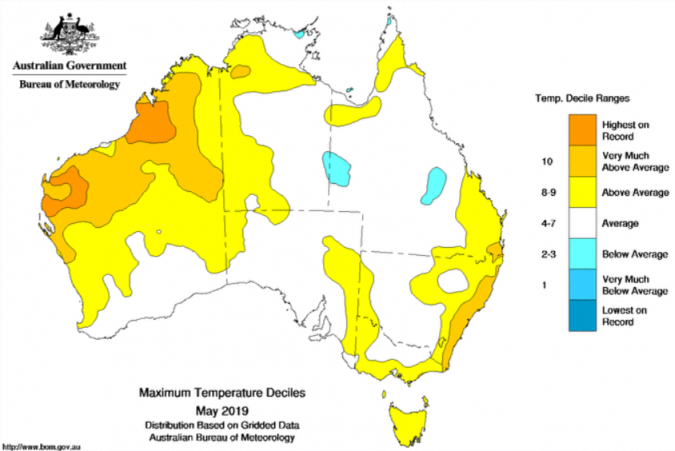 Figure 4. Maximum temperature deciles for May 2019. 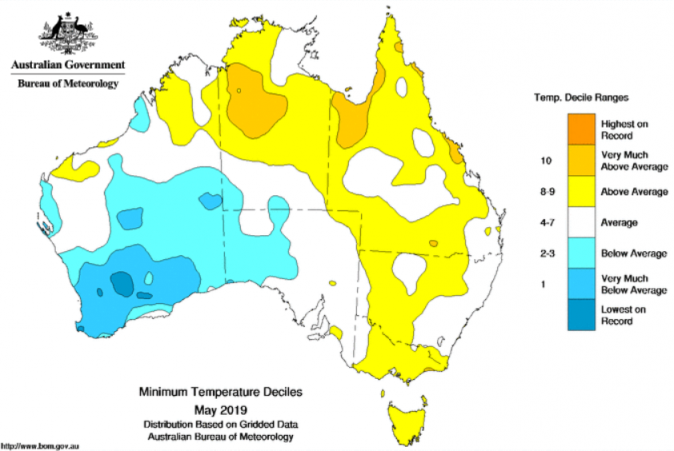 Figure 5. Minimum temperature deciles for May 2019.

The BoM’s ACCESS model forecasts indicate higher chances of  ‘Above Average’ maximum temperatures across most of the country going into the next three months (Fig. 6). Minimum temperatures also have a higher chance of being ‘Average’ to ‘Above Average’ over the June to August period except for parts of Queensland, New South Wales and South Australia (Fig. 7). A combination of clear nights and dry soils in the Southern parts of Australia will raise the risk of frost inland. 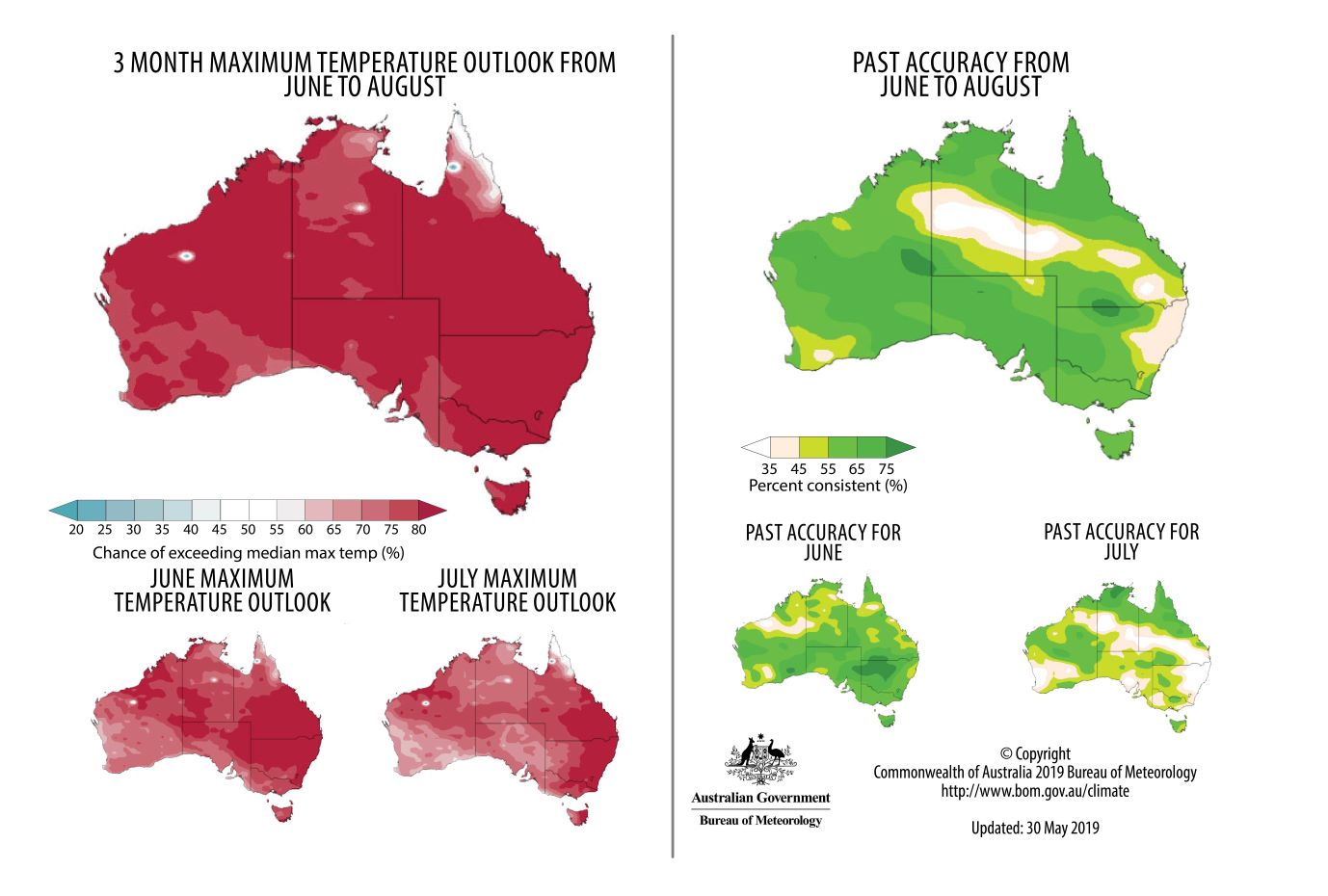 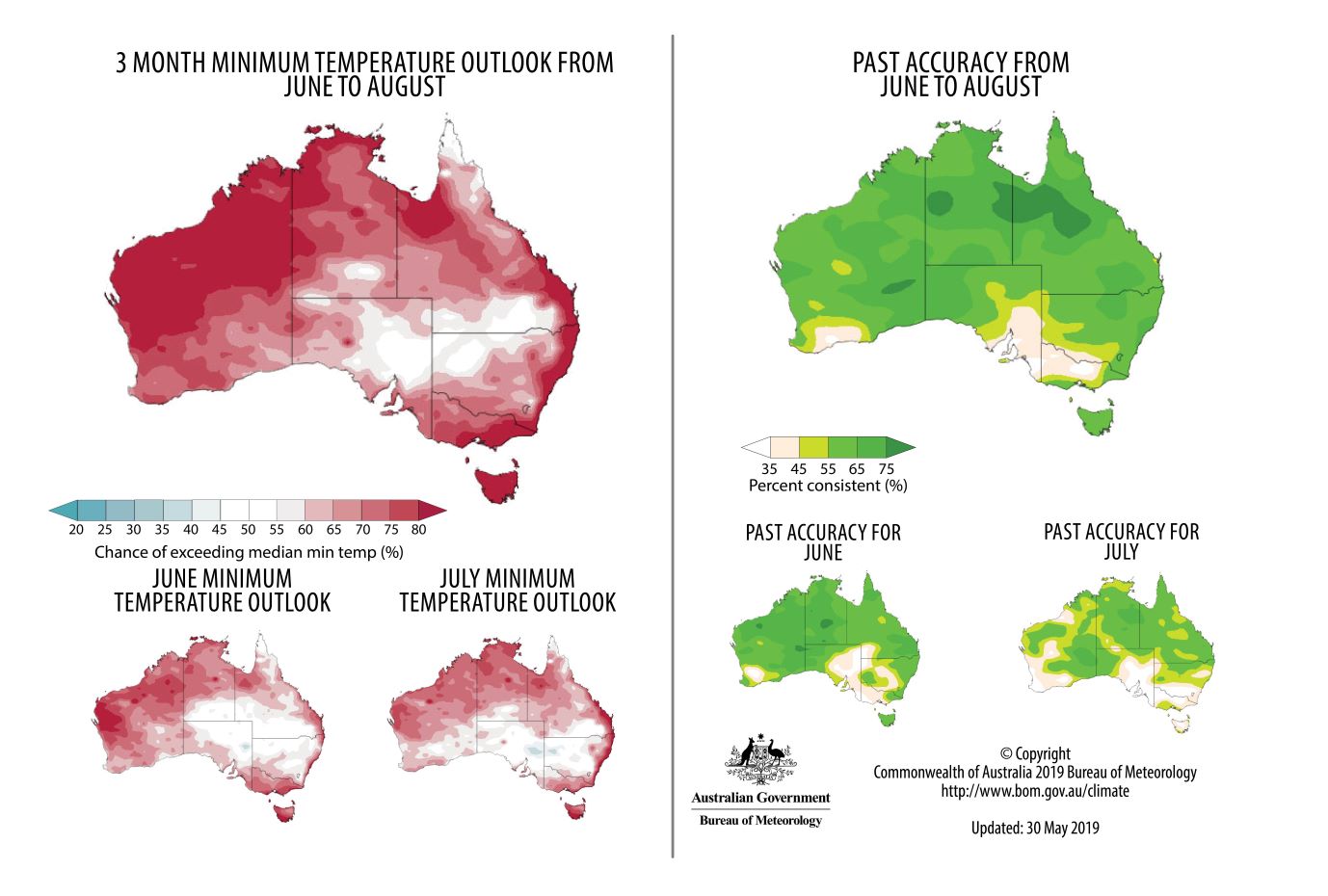